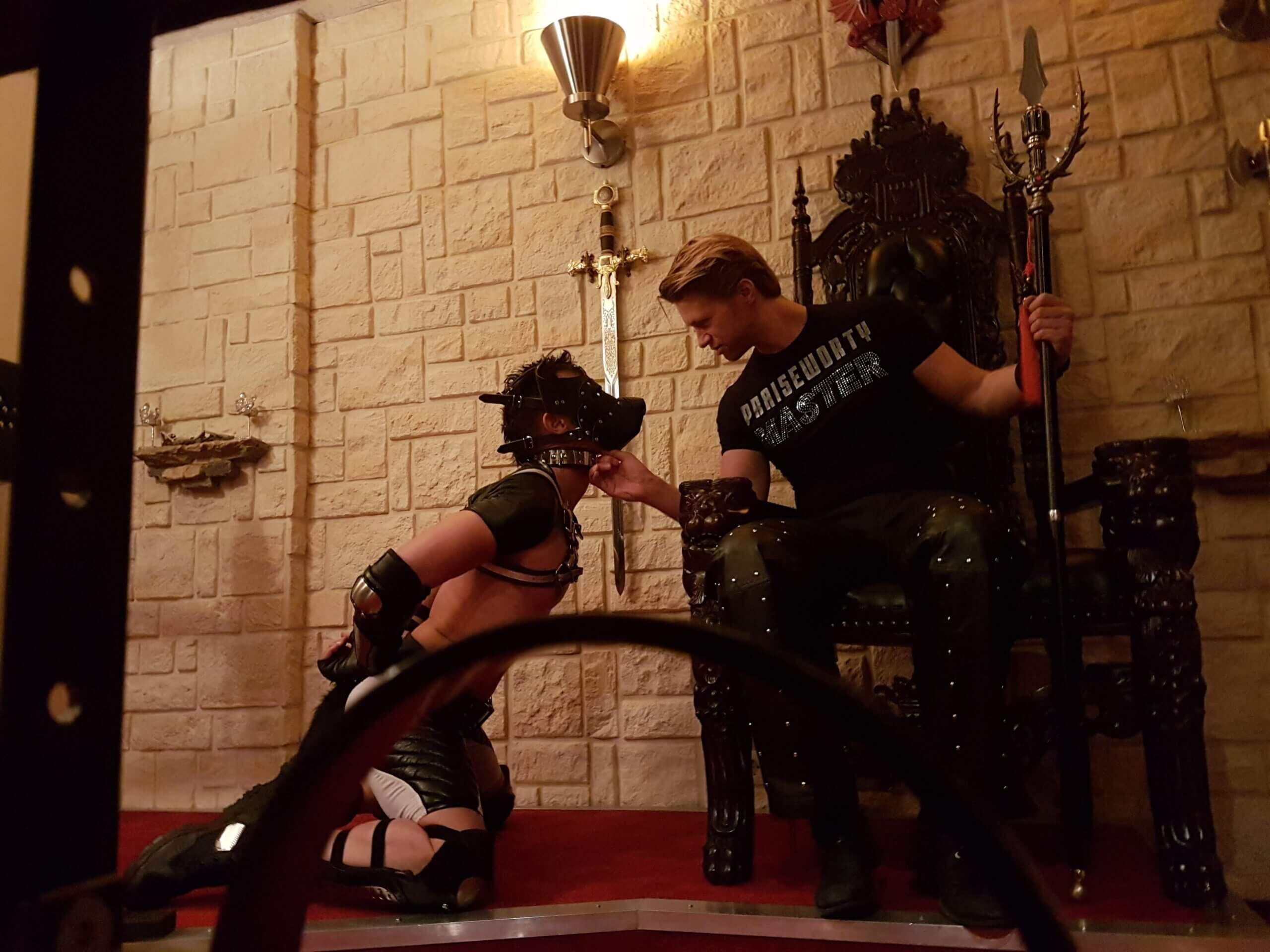 Dan talks about his journey to find his authentic form of dominance and his learnings and thoughts when he tried to become the stereotypical Master, and how important it is to define yourself as you want to be.

You can find out more about Dan at:

By joining Patreon, you will join the Master/slave community of MasterSlaveLifestyle.com, helping to support a special podcast and website. Membership comes with benefits such as:

If you are interested in being interviewed by myself for the podcast, please get in touch.

Get early access to the podcast before anyone else

Become a Master/slave Lifestyle member for only 5 euros, and always be the first to get any new episodes.

[00:00:02.500] – phil
Welcome to the Master/slave Lifestyle podcast where we interview the people living the real Master/slave lifestyle all consensual and all in different ways.

[00:01:27.820] – Dan
I’m also in a relation with my former slave and husband and we are together now for 13 years. And yeah, I think that’s basically like a little bit in the background. I’m thirty seven years old living in Berlin now and. Yeah. So I think that’s kind of who I am at the moment.

[00:01:47.560] – phil
And just before I hit the record button, we were talking about what title to give you, and you were kind of saying that you didn’t really want to be referred to as a Master. So could you tell me a bit more about that and what your thinking was?

[00:02:03.800] – Dan
Yes, I think we go also deeper in the background, because in the past I was called myself a master and I was really happy with that. But over the years of development, I think that it’s not the fitting expression anymore. It has a lot of prejudices and brings up a lot of expectations on the other side, like a strict protocol, you have to say Sir all the time and everything. And to be honest, most of my own protocols, I’m even forgetting over the time.

[00:02:35.050] – Dan
So to be honest, I’m not that type of a master. I’m a Dom, I’m a sadist. I am rigger, I have an idea what I want and I kind of get what I want. And I’m also a master in regard to my husband sometimes. But if I would call myself a master, I would introduce myself as a master. I think this would be a completely wrong impression, what the other people have of me.

[00:03:09.670] – phil
So I was just thinking about some of our dinners. It’s always been very clear to me that there that you are the dominant so. Well, you don’t have the title master. You are the nominally, the person in charge in a situation.

[00:03:25.900] – Dan
Correct. But I’m also happy to decide that the other can be in charge. So it’s not that I have to be a top all the time. And for example, total power exchange relationship, which was like a really crazy idea I loved in the beginning. And it’s just not me. I like to take responsibility, also like to be in charge of the things. But I also like to to let decisions go. Like, I’m not really caring about what you’re wearing, but if you’re wearing the wrong stuff, I tell you. So just make it right.

[00:04:00.600] – phil
OK, very interesting. And so say you set that total exchange. It isn’t really your thing and you found that it didn’t really work. And would you like to speak a bit more about that?

[00:04:15.520] – Dan
Yes. So we can let’s call it maybe a light power exchange like like the people describe me all the time as a natural domme. So I never played a role. I was never using strict protocols or artificial things to put myself in a higher position. But just when I speak with the people they know, they didn’t have an idea what to do, that I want this and they have to follow these rules. So this is kind of. Yeah, but I understand as a natural, dumb or maybe a master, I don’t know how you want to call it, but yeah, I see something.

[00:04:55.150] – Dan
I have the feeling it should go in that direction. And then I said, oh, maybe make it this way. And if I don’t have any idea of. About it, then I just let the situation go, and if it goes in the wrong direction for me, I tell or I can change it. Or I can also say now I have a clue how I want it and let’s do it that way. So it’s I let the things flow a little and then I give, like, the direction I want.

[00:05:27.330] – phil
It sounds like a very organic process that you you want it to develop in its own way without forcing it. Absolutely.

[00:05:35.370] – Dan
Absolutely. I know this is sometimes very difficult for people, especially if they expect that. Oh, yes, now I’m coming. Like in the beginning, I was doing this typical sessions, like, OK, you get in, you kneel down and I come from behind. I blindfold you, tie your hands to the back, then you kiss my feet on my boots, and then you do this and that. And we had the protocol of structures. And still sometimes with my husbands, there are some protocols.

Podcast Episode 2: Exclusive Interview with a Master and slave and their 14 Year Polyamorous Master/slave Relationship

[00:06:01.440] – Dan
If I’m asked them or if I ask them to do them, he’s doing them. And that’s always what I want to point out, that he’s still my slave and we are still in this kind of relationship. But it’s not like all the time when we are starting something, he has to lick my boots or similar. So you also don’t have to call me sir all the time. But for example, sometimes I want to show off, like if we have some some people together.

[00:06:35.220] – phil
Thank you for sharing that. So you mentioned protocols a few times. So really think about protocols you like?

[00:06:44.190] – Dan
I like protocols in the way as they are giving you an easy access, like when you’re insecure about yourself, especially as a DOM, if I’m going with a new person or something, a protocol can give me a really, really good structure. Also as the DOM to exactly know what to what to say, what to ask for, I can make a clear structure planning before. And if I’m not yet in the mood, probably during the protocol I get into the mood.

[00:07:12.750] – Dan
So that’s a really, really strength of protocols and also some other stuff, like, for example, when you’re let’s say when you’re walking on the street and you’re sub has to walk half a meter behind you, this is, for example, something I really like to do with people who I’m not yet really emotionally secure, that they’re really my subs then as these protocols just to let them show that they are my subs. So this will keep them in the mindset, this should express that I’m the Dom, that they have to follow my rules.

[00:08:01.320] – Dan
If I have an inner if the other person has an inner expression like any doing saying, if I feel that there’s a high respect that this person is looking up to me and respecting myself, actually we can be on an eye on eye level. But I want to feel in what he is saying, that he is really putting his identity behind his wishes. Like what I want is first and then his idea. So if somebody, for example, a sub comes to me and makes like a pushy botton or something, I think this can be sometimes very sexy.

[00:09:00.600] – Dan
And I want to have the feeling that this is really because he thinks that I like it and not because he wants it. And if I have this feeling then I’m really happy. And then it’s like I can change the whole story by SNAP and everything is in another direction. And that’s really at the point where I want. And then I let the whole situation go and then it can be but at the puppy pla,y bitch and Daddy or whatever, this can be really fun.

[00:09:37.110]
It’s very interesting. It kind of triggered a thought from another conversation I had with someone else, which was at one point they were having issues with their slave and what they found out was the slave was trying to turn the master on in how the slave wanted it rather than doing it as the master. But like. Yes, is that something you can relate to……..